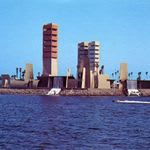 Bike, walk, boat or even drive miles of beautiful coastline in Long Beach, and you cannot help but admire the four beautiful oil islands in the Long Beach Harbor. If you are new or visiting the city you might even mistake the islands as cool floating resorts or condominiums. And, the light show at night seems like it might be at home on the Vegas Strip.

Before the oil islands were built, the beaches of Long Beach were full of oil derricks due to the discovery of oil in 1932.  The Wilmington Field is the oil field’s official name, and is one of the top five largest oil reserves in North America. It runs between San Pedro and Seal Beach.

In 1965 as part of A Long Beach city beautification project the oil islands were designed by renowned landscape architect, Joe Linesch. He was well known at the time for his theme park landscape designs including Disneyland. The goal of the four islands was to camouflage and sound proof off shore oil drilling rigs. Linesch did not want to take away from the natural beauty of the ocean and harbor. He followed strict environmental rules in all of his designs.

The oil islands were constructed of dredged sand from the harbor and excavated rocks from Catalina Island. Concrete screens, waterfalls, colored lights, and hundreds of plants and palm trees line the perimeter of the islands. The wellheads and pipelines are below the water’s surface to help improve the appearance of the islands. The cement sculptures are true art forms reflecting the movement of the ocean. There are more than 300 palm trees and plants from as far away as Australia. There is a one to one ration of palm trees to oil wells.

Condominium like structures were built to cover the actual drilling rigs. The structures were designed to mirror the landscape along Ocean Boulevard. In fact, one looks just like the Galaxy Tower. Every detail was strategically planned to enhance the view from land. Also, a dedicated full time landscape crew works daily to maintain the integrity and beauty of these historic islands. Linesch said he did not want to impact the coastal landscape. When the project was finished, he said the harbor looked like the “Riviera of the West.”

The fourth island was named after Theodore Freeman. He died piloting a jet for NASA. Freeman Island is the largest island at 12 acres in size. The other three are about 10 acres in size. Grissom Island is the closest and contains the most sculptures, waterfalls, and the condo that looks like the Galaxy.

Every day workers travel across the harbor on barges to work on the islands. Inside the lush green outline, hard industrial equipment drills around the clock for oil and natural gases. It cost the THUMS Corporation $22 million dollars to build the islands that include more than 300 oil wells. THUMS was a consortium made up of Texaco, Humble Oil (now Exxon), Union Oil, Mobil and Shell Oil. Today Occidental Petroleum owns the islands, and they still produce about 46, 000 barrels of oil a day. They also take pride in their spotless safety record since the islands were first built.

These tropical astronaut islands may not be tourist attractions, but they are huge natural assets to the city. The actual oil revenue generates about 5% of the city’s annual budget. This helps with the overall infrastructure of the city including libraries and schools. The oil islands are definitely unique to Long Beach. There is no other design like it in the world… True California Black Gold.

If you’d like your own view of the Long Beach oil islands, there are lots of condos along Ocean Boulevard and adjacent streets. We'd be happy to help you find your dream home.